Offshore energy has been the driver of the renewable marine energy conference Marine Energy Week and, just like the rest of the World Maritime Week events, it has had an exhibiting area, and has developed an interesting conference programme.

Yesterday’s meeting hosted the “Offshore Energy, a Growing Market” conference, which was opened by Iñigo Ansola, director general of the Basque Energy Agency (EVE), and Jose Ignacio Hormaeche, director of the Basque Energy Cluster, who later acted as moderator of a round table with representatives from Iberdrola, DG-Mare and Siemens Gamesa. In this regard, Ansola, who gave his point of view of the current situation and trends in offshore energy, emphasised the technological capabilities of the Basque Country’s industry, and highlighted that the EVE “has been a pioneer in providing support for the testing of prototypes and marine devices, as impetus for technological development, as well as for risky investments, which are all the commitments to technological innovation.”

José Ignacio Hormaeche, for his part, stressed “the need to continue enhancing the capacity that exists in the Basque Country for working in the offshore energy sector, in which over 50 companies are now active”. In Hormaeche’s words, “the offshore field in marine energy represents a challenge; an expectation of a growing niche market with some considerable prospects, above all in Europe, which is offering the most and where growth will be strongest in the coming years”.

In his statement, the director of offshore technologies of Iberdrola, Victor Rey, highlighted the speed at which innovation is being applied to offshore wind power, and underlined the importance that technological progress has had in reducing costs. “In Europe, 10% of all wind energy is offshore wind power. It is the most attractive investment for the years to come, and we want to be at the forefront”, acknowledged Rey. 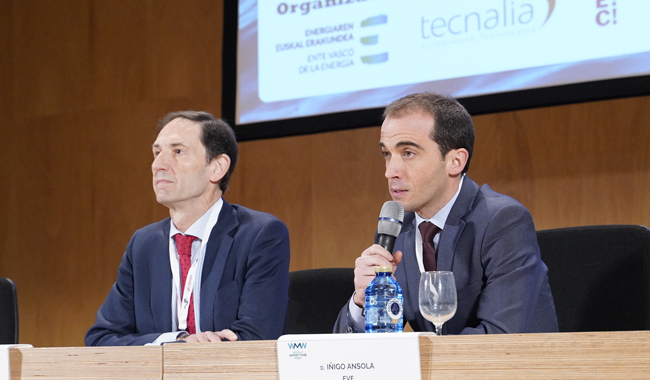 Xabier Guillou, General Directorate of DG Mare, manager of the European Commission’s policy on maritime affairs and fisheries, presented his vision and expectations of marine energy for the coming decades. “We expect that a quarter of European Union energy will come from offshore energy by 2050”, he reported. In the same line, from the point of view of Poul SkjÆrbÆk, who analysed the current situation and the technological challenges expected in the sector, “huge potential exists for offshore wind power, with a rapid decline in prices that will accelerate the growth and development of new markets”.

Decide which cookies you wish to allow. You can change these settings at any time. However, this may cause some functions to no longer be available. For information on deleting cookies, please visit the help section of your browser.

With the slider, you can enable or disable the different types of cookies: