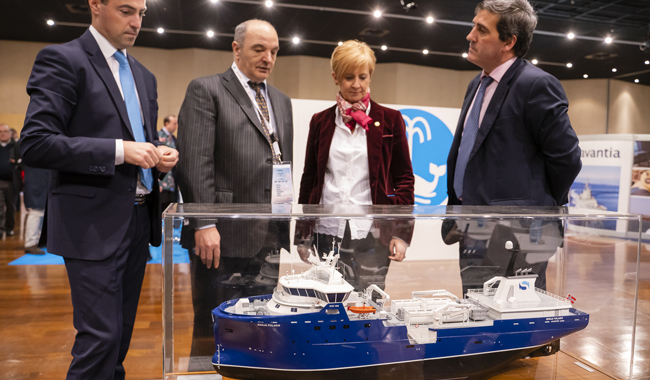 Bilbao Exhibition Centre was converted, over the three days, into a huge training and learning ship in which around 2,000 attendees heard the thoughts of the main shipowners and international companies on the present and future of the so-called blue economy; an industry that, according to the latest report from the European Union, is credited with a turnover of 566,000 euros, generates 174 million in value-added tax and creates jobs for nearly 3.5 million people. As far as the Basque maritime industry is concerned, and according to data from the Basque Maritime Forum, last year about 2.8 billion euros were invoiced and employment given to 13,735 workers.

“The sea and technological innovation are two crucial aspects, inseparable and fully representative of what the economic and industrial activity of the Basque Country entails”, explained Arantxa Tapia, Minister for Economic Development and Infrastructures, during the opening plenary session of the second edition of World Maritime Week, held in the BEC auditorium. Tapia recalled in her speech that “fishing in the 21st century incorporates new technologies and techniques that also require people with new knowledge; a practice which, in addition to being sustainable and respectful to the environment, is also efficient”. Lastly, the Minister referred to offshore energy, of which she said, “it opens up opportunities both for the generation and development of industrial technology, the results of which are exportable and applicable worldwide”. Nevertheless, Tapia recognised that “we find ourselves falling short of our desired goals” and she committed to “redoubling efforts” to generate renewable energy.

The official opening of World Maritime Week from Arantxa Tapia was chaired by Alejandro Aznar, Chairman of the Spanish Maritime Cluster and of the Ibaizabal Group, and was attended by Xabier Basañez, CEO of BEC, and Imanol Pradales, Provincial Councillor for Economic and Territorial Development, as well as the Deputy Ministers of the Basque Government Javier Zarraonandia (Industry); Bittor Oroz (Agriculture, Fisheries and Food Policy) and Jon Azkue (Work and Social Policy). They were accompanied by Iñigo Ansola, director general of the EVE; Antonio Garamendi, chairman of the Spanish Confederation of Business Organisations (CEOE); Ricardo Barkala, chairman of Bilbao Port Authority and Vicente Reyes, sub-delegate of the Government in Bizkaia.

Philippe Dreyfus, chairman of the Louis-Dreyfus Group; Juan Riva, chairman of the Suardiaz Group, or Alejandro Aznar himself were some of the speakers taking part at the various round tables organised in each conference: Sinaval, with the naval sector; FuturePort, with the ports sector; Eurofishing, with fishing industry, and Marine Energy Week, with renewable marine energy. Indeed, energy transition was one of the subjects that acquired the most relevance in the maritime forum, as it means an important business opportunity for the sector.

The start of transport decarbonisation will make way to new energy sources such as offshore wind electricity and will also enable the construction of new vessels that will ostensibly reduce pollution. As explained by Juan Riva, chairman of the Suardiaz Group: “By 2030 we will be talking about decarbonisation, because a 40% reduction in CO2 emissions will be mandatory. This will give rise to a set of changes in the sector and we must be prepared for it”. Xabier Viteri, business director of the Iberdrola Renewable Energy Division, was very clear that “much activity is expected for shipyards, submarine cable manufacturers and energy transport companies”. He was referring to the offshore industry which, according to his forecasts, will enable Europe to triple its offshore capability, while the Asia-Pacific Region will be multiplied by five.

Much was also said, during this edition of World Maritime Week, regarding new technologies, including energy technologies, with various talks on ports digital transformation or green ports. And, on a more human level, the generational changeover of the fishing fleet and how to confront it was the focus of another of the round tables, which have been supported with testimonial evidence from representatives of Pasaia, the Principality of Asturias or the Galician port of Celeiro, among others.

For its part, the Luxua Hall welcomed a hundred firms who showed visitors the latest developments in the sector. The most important national shipyards and companies like Navantia, Zamakona, Armón, Emerson, Man, Finanzauto, Bombas Azcue, Murueta… among others, were all at the event. The significant workload that some of them have nowadays did not go unnoticed by those attending. So, Javier López de Lacalle, chairman of the Basque Maritime Forum, acknowledged that 2019 will be a “reasonably good” year because shipyards have work for the whole year and, in addition, he claimed, are negotiating “possible deals” that could come to fruition in the coming months. For his part, Antonio Garamendi, chairman of the Spanish Confederation of Business Organisations, reflected: “If there were more shipping companies in Spain, there would be more demand for vessels and more work in the shipyards, which would also benefit the auxiliary industry”.

On Tuesday night, as is customary, the Ercilla Hotel hosted a gala dinner. As part of this event, prizes were given for the IV FINE Awards in recognition of the work and efforts of companies and individuals in the maritime sector. Thus, the prizewinners were: Oizmendi, of the Ibaizabal Group, for the Best Ship; Astilleros Murueta, for Best Shipyard; Naviera Elcano received the prize for the Best Ship-owner; Ocean Master took the prize for the Best Engineering Project; the Spanish Oceanographic Institute won the Best Institution prize, and José Poblet, director of Cotenaval, took the award for Best Professional. In addition to these prizes, special acknowledgement was given to the fishing sector, personified by Grupo Balfegó, while in the renewable energy sectors, recognition was given to work carried out on project Nautilus, of Nautilus Floating Solutions, and in the port sector, the statuette went to Enagás for its Core LNGas Hive project.

The honorary prize, in recognition of a lifelong professional career, went to Luis Arbulu, president and founding partner of Grupo Arbulu, one of the main naval electronics groups at world level. Meanwhile, the prize for effort, dedication and passion, according to the judges, went to Javier Garat, secretary of Cepesca and president of Europêche. Lastly, the judges for the FINE awards wanted to make special mention of the centenary of Group G. Junquera Maritima, which will be celebrated this year. The Deputy Minister for Industry of the Basque Government, Javier Zarraonandia, presented the award to Teresa Fernández Marmiesse, president of the Group.